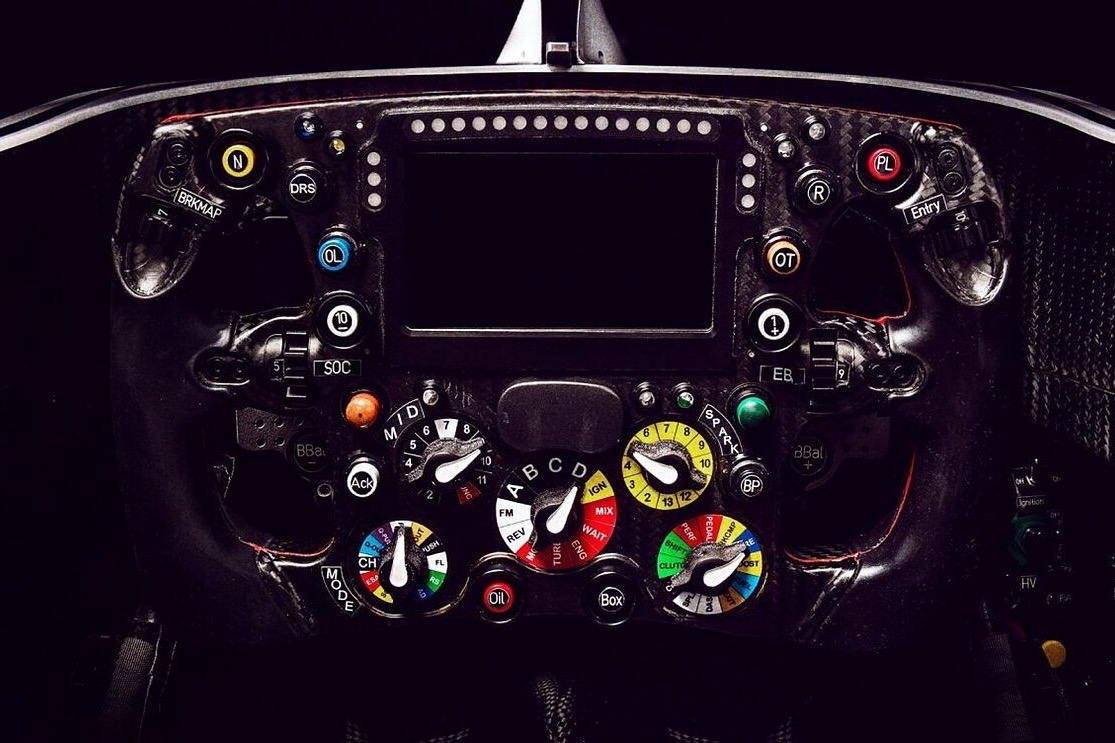 Many times throughout F1 history, drivers rage quit the race by throwing out the steering wheel. Knowing it costs around 90 000 euros, wouldn’t releasing the anger on something else be a better idea? However, an F1 steering wheel is much more essential than most of us think. It provides the driver with control of differential, brake, power adjustments, to name a few.

Let’s take a quick F1 steering wheel tour to find out why they are so expensive and why taming them requires months of practice.

How are F1 steering wheels designed?

Every second, even millisecond, is vital in Formula 1 racing. That’s why there’s no button layout on a steering wheel that works for everyone. You may have seen that not all F1 steering wheels are identical. Each driver has multiple wheels designed for different tracks. Rubber grips are molded to the driver’s hands, and buttons are on the reach of thumbs.

F1 cars have over 1000 horsepower, average track speeds exceed 200 km/h, and it gets over 300 km/h on straights. There’s lots of noise, vibrations, and constant steering adjustments, so accidental button presses and knob breaks are possible. However, they cannot be tolerated. Engineers take switches from aircraft to provide rigidity, and they design buttons that won’t press down accidentally – more on that later.

F1 steering wheels received much bigger and more intuitive screens during the last decade. Today drivers can see up to a hundred pages of information, including tire pressures, oil temperature, lap times, battery status since F1 cars have been using hybrid power for the last few years.

The most interesting buttons and switches on an F1 steering wheel

Modern F1 racing isn’t all about driving anymore. Complicated and refined steering wheels have many buttons which let the driver control various car systems and make thousands of different setup combinations while racing. Let’s take a look at some of the coolest and most exciting toys F1 drivers play with.

The idea of putting retractable rear wings on road-legal cars came from motorsports. Formula One cars use vast spoilers to provide better traction. However, drivers can adjust the rear spoiler with a push of a button to reduce drag at high speeds.

F1 drivers can’t afford to switch to neutral accidentally. That’s why they can’t do it with gear paddles. When pressed, this button activates neutral gear, and it will shift into reverse when held. Some drivers state that they have never used reverse as it’s only relevant after crashes and spin-outs. It really is something to brag about!

No matter how hard you accelerate, this button will drop the speed down to 60 km/h or 80 km/h max – the specific speed depends on the circuit. There were situations when drivers accidentally pressed this button while cornering, finding themselves in an awkward position when exiting the corner. To avoid such shameful situations, engineers tend to surround the button with protective walls.

All F1 drivers develop muscle memory, which helps to tweak the brakes and differential by themselves. Usually, they have three rotary switches for different situations such as entering, exiting corners, and going high speed. The higher the number on the switch, the tighter the differential lock is during these specific moments.

F1 cars have rotary switches for changing the brake balance to either front or the rear. Drivers know which axle gets more beating, which tires are overheating, so they can optimize the situation by adjusting the brake balance. It helps to avoid oversteer, understeer, and locking brakes.

This one is my favorite. F1 cars usually don’t use all the power they have. However, when you’re about to overtake an opponent, you want all available juices – that’s where an overtake button kicks in. When pressed, both engine and hybrid system go all in to give the best chance of a clean overtake.

STRAT switch may be named differently depending on the F1 car, but the purpose is always the same. It sets how much power the engine provides. As mentioned earlier, F1 cars don’t always go nuts on power because 1000 horsepower is enough to peel asphalt with any tires on. Drivers can choose how much power they want according to their driving styles and intentions. Keeping it low is also relevant when a driver must preserve the engine.

Next time you see an F1 race on TV, take a look at which buttons drivers push. Observing when they activate the pit lane speed limiter, an overtake mode, or drag reduction system takes watching the F1 racing to the next level.