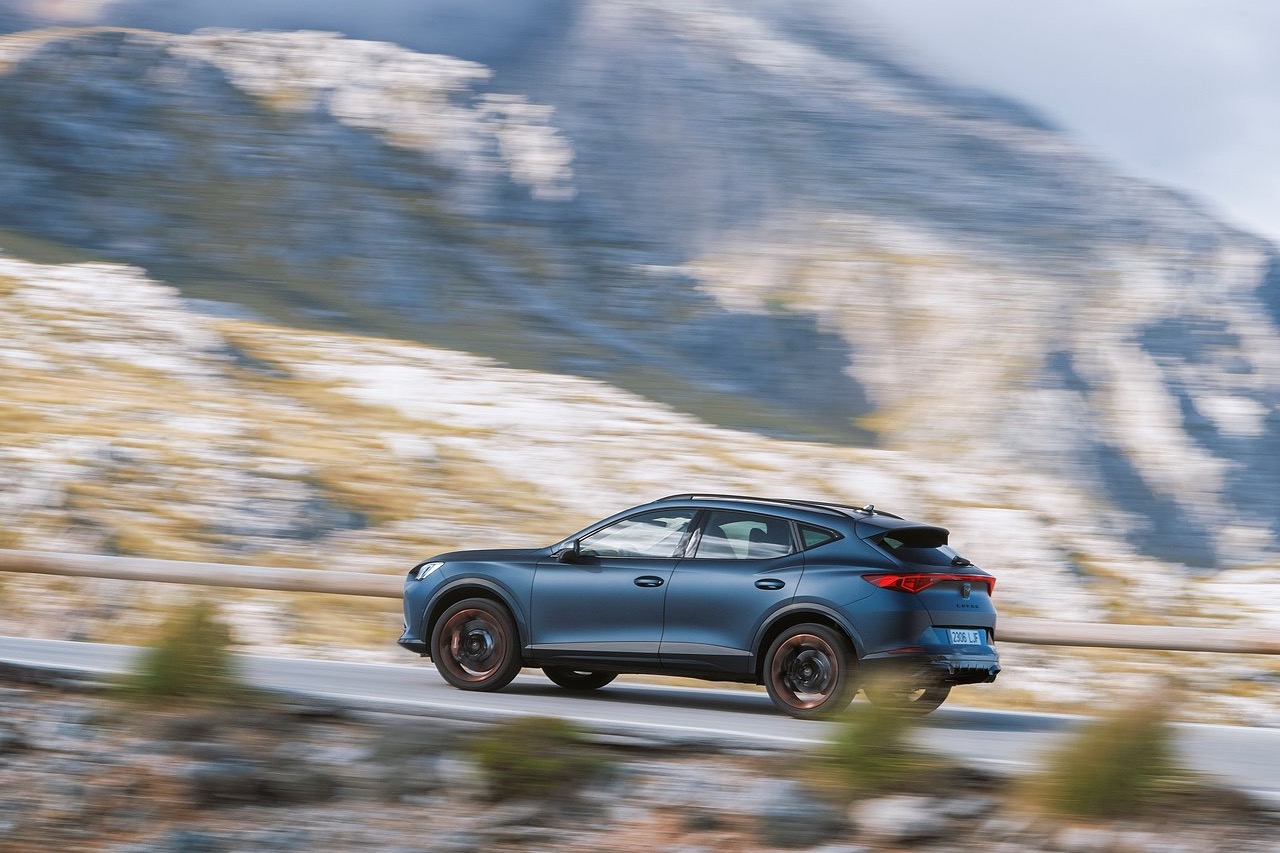 Modern SUVs get so much hate because many think they must compete with off-roaders. Well, while real off-roaders like Toyota Land Cruiser or Suzuki Jimny gladly choose the harder path, SUVs are in between these and simple road cars. That’s why drivers also seek sportiness in their new SUVs.

The market for compact SUVs and crossovers is at an all-time high – even exotic car manufacturers like Aston Martin and Lamborghini decided to increase their budget by offering SUVs. But what if you’re into something more compact and cheap? Can you still have fun?

Oh yes… There we have five best small SUVs that are as fast as Ferraris were not so long ago.

Cupra is a performance-based sub-brand of Seat, which introduced The Formentor in 2020. It’s being marketed as a coupe SUV. Even the base version looks extraordinary – a diamond-shaped grille, lots of air vents, and aggressive body lines.

But it’s the VZ version that shines the most. VZ means veloz in Spanish, which translates to fast. This model features a fantastic 306-horsepower 2.0 liter turbocharged engine, which gets this SUV from zero to a hundred in just 4.5 secs! Besides, you won’t be worrying about brakes often on the track because Formentor VZ handles excellent thanks to the stable MQB Evo platform.

The price of Formentor VZ starts at just 36 000 euros. You get a lot of bang for the buck, but money-saving techniques are revealed in the cabin. Besides, the boot space is barely over 420 liters.

The second-gen Countryman is like a candy for practical, trendy drivers. Not everyone adores design solutions of Mini, but it’s inimitable for those who do. Mini Countryman is practical, very stylish, and always catches the eye of pedestrians. The JCW version adds lots of fun and makes the Countryman a very competitive sports crossover! The tuned 2.0 liter engine boasts 231 horsepower and 350 Nm of torque. What makes it even more fun is the platform, which is also being used in BMW X1 and X2.

Mini should do something with their interior and ride quality, though. Yes, it handles great, but even die-hard Mini fans are getting bored of 20-year-old interior design trends and stiff suspension.

One of the cheapest premium-badged SUVs you can buy today is the Porsche Macan. It’s the Cayennes smaller brother, which is cheaper and more desirable for the masses. Sure, the overall price is still high – even the base version starts at about 60 000 euros, but even this has 250 horsepower.

Porsche Macan offers very snug rear seats, and the base model is not that plush on the inside. But it handles like a sports car, and everybody knows you own a Porsche at first glance.

This is one of the crazier choices on this list. BMW X2 isn’t as popular as the X3 or X5, but it serves great if you’re not into that look at me, I’m driving a big SUV feeling. It features a more compact, lighter platform, because of which the X2 feels more agile. Moreover, the four-cylinder turbocharged engine is superb. It features over 300 horsepower and an astonishing 450 Nm of torque! This is enough to do 0-100 km/h in 4.7 seconds.

The ride is anything but comfortable, and the price of the M35i version may exceed your budget, but you get endless fun and top-notch build quality inside and out.

Even though there’s almost no point in buying a Volkswagen T-Roc when there’s a Golf around, the T-Roc R is still an exciting machine. It’s cheaper than its rivals and uses the same engine and 4-Motion system as Golf R does. This high performance small SUV weighs less than 1.5 tons and has 400 Nm of torque – it’s made to stick you to the seat really well.

All in all, it’s just an awkward VW Golf R – slower and more expensive. Golf R is a much safer choice if you want a car for having fun on a local track unless your wife told you to get a T-Roc.